US congresswoman shot in head and six others, including nine-year-old girl, killed as gunman attacks public meeting in Tucson

The US congresswoman Gabrielle Giffords today remained in a critical condition in hospital after being shot at point-blank range at a public meeting outside a supermarket in Arizona yesterday.
Six other people, including a nine-year-old girl, a federal judge and a member of Giffords’s staff, were killed when a gunman opened fire outside a supermarket in Tucsonwhere Giffords was meeting with constituents, shooting 18 people.
Giffords, a 40-year-old Democratic member of the House of Representatives, was in a critical condition at the University Medical Centre in Tucson, where she was operated on by a team of neurosurgeons.
Dr Peter Rhee, the medical director of the hospital’s trauma and critical care unit, said a bullet had passed directly through her brain.

She had been shot once in the head “through and through”, he said at a news conference.
Rhee said he believed Gifford would recover, but added that doctors could not speculate on what her long-term condition might be.
“I can tell you at this time I am very optimistic about her recovery,” he added. “We cannot tell what kind of recovery, but I’m as optimistic as it can get in this kind of situation.”
The nine-year-old girl who was killed has been named as Christina Taylor Greene. Born on September 11 2001, her parents described her as the “best daughter in the world”.
She was featured in a book called Faces of Hope: Babies Born on 9/11. Her uncle, Her uncle Greg Segalini told the Arizona Republic that a neighbour was going to the event and invited her along.
She had a keen interest in politics, was on her school government, and had wanted to go to the Giffords event to learn more about the political process.
The Pima County sheriff’s office has released the identities of the other people killed in the shooting. They are John Roll, 63, a federal district court judge, Gabriel Zimmerman, Giffords’ 30-year-old director of community outreach, Dorwin Stoddard, 76, a pastor, Dorothy Murray, 76, and 79-year-old Phyllis Scheck.
Giffords was shot at point-blank range by a 22-year-old army reject identified by investigators as Jared Lee Loughner, who was arrested at the scene and was refusing to cooperate with officers, according to police.
He was described by a doctor who treated some of the victims at the scene as a young white man wearing dark clothing, with a “determined look on his face”.
At a press conference following the attack, the Pima County Sheriff, Clarence Dupnik, blamed political vitriol for fuelling the attack.
“People tend to pooh-pooh this business that we hear about all the vitriol we hear inflaming the American public by people who make a living doing that,” he said. “That may be free speech – but there are consequences.”
He said Arizona had become “a Mecca for prejudice and bigotry” and that “people who are unbalanced are especially susceptible to vitriol”.
Describing the shooting as “an unspeakable tragedy”, the US president, Barack Obama, asked people to pray for “a friend of mine” who was battling for her life.
“While we are continuing to receive information, we know that some have passed away, and that Representative Giffords is gravely wounded,” he said.
“Gaby is not only an extraordinary public servant, but also someone who is warm and kind, who was liked by her colleagues and her constituents.”
As Obama ordered the FBI director, Robert Mueller, to Tucson to oversee the investigation, Dupnik said police had a photo of a second man they are searching for, who they believe was also involved in the attack.
The shooting happened shortly after 10am local time outside a Safeway store. Loughner ran up and opened fire on Giffords while she was talking to a couple at an event called Congress on Your Corner, designed to allow members of Giffords’s 8th Congressional district to meet her face to face.
Giffords had used Twitter shortly before the shooting, saying: “My first Congress on Your Corner starts now. Please stop by to let me know what is on your mind or tweet me later.”
Witnesses said the gunman ran into a “crowded area” and began “firing indiscriminately”.
Andrea Gooden, who was working across the road from the scene, said: “I heard about 15 shots. Then there were people racing across the parking lot.”
Another witness, Steven Rayle, who helped restrain Loughner, said: “The event was very informal. Giffords had set up a table outside the Safeway and about 20 or 30 people were gathered to talk to her.
“The gunman, who may have come from inside the Safeway, walked up and shot Giffords in the head first.”
Jason Pekau, an employee at a shop close to the shooting, said two bodies were covered on the pavement after emergency services had arrived at the scene.

After shooting Giffords, Lougher used an automatic weapon to fire at up to 30 people, leaving 13 people wounded, many of whom were airlifted to hospital.

Loughner only attempted to flee when he ran out of ammunition. One of Giffords’s aides tackled the assailant and helped to pin him down until police arrived.

More details emerged today as it was revealed that Loughner had shown increasingly strange behaviour in recent months.

He had made internet postings – at least one showing a gun – and a series of videos in which he made disjointed statements on topics like the gold standard and mind control, according to the New York Times[1].

Pima Community College said he had been suspended for conduct violations. He left the college in October after five instances of classroom or library disruptions that involved the campus police.

The shooting has sparked fierce critics of the toxic political climate both in Arizona and the US as a whole. In recent months, Giffords, a supporter of the healthcare reforms, had received death threats, and her offices had been shot at.

While the motive for the shooting was not immediately clear, Giffords is one of 10 Democrat members of Congress who were the subject of harassment over their support for Obama’s healthcare overhaul. 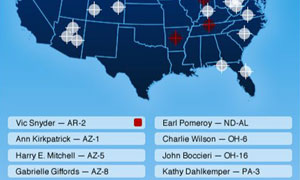 Detail from Sarah Palin’s ‘target map’ of the US. Photograph: AP

Her Tucson constituency office was vandalised in March after she voted in favour of the controversial health bill, which was bitterly opposed by the US right.

Giffords was named as a political campaign target for conservatives in last November’s mid-term elections by the former Alaska governor Sarah Palin.

Palin had published a “target map” on her website using images of gunsights to identify 20 House Democrats, including Giffords, backing the new healthcare law. Gifford won by a narrow margin, seeing off opposition from a Tea Party-backed Republican candidate.

In an interview after the office vandalism, Giffords referred to the animosity against her. “We’re on Sarah Palin’s targeted list,” she said, “but the thing is, the way that she has it depicted has the crosshairs of a gun sight over our district.

“When people do that, they have to realise that there are consequences to that action.”

Palin faceed huge criticism for her campaign, and issued a statement via her Facebook page offering her “sincere condolences” to Giffords and her family.

Giffords was also the target of a campaign event advert for her opponent, Jesse Kelly, which invited supporters to fire a gun with the candidate. It read: “Get on Target for Victory in November. Help remove Gabrielle Giffords from office. Shoot a fully automatic M16 with Jesse Kelly”.

Giffords, who was born in Tucson and has two children, took office in January 2007, supporting immigration control, embryonic stem-cell research and the right to abortion.

At another event in 2009, similar to the one Giffords was holding when she was shot, a man was removed by police when his pistol fell to the supermarket floor.

Although a Democrat, Giffords was a strong supporter of the right to bear arms and was re-elected to her third term last November, edging out Tea Party favourite Kelly.

She is married to the space shuttle astronaut Mark Kelly, and is the first Jewish woman elected to Congress from Arizona and the third female ever to be elected for that state. She has been building up a prominent public profile, with frequent appearances in the national media.

The US Capitolpolice force said it was advising Congress representatives and their aides to “take reasonable and prudent precautions” about their own security in the wake of the shooting.