With the Republicans in a position of real power, Obama and the Democrats are bracing themselves for a fight on three fronts 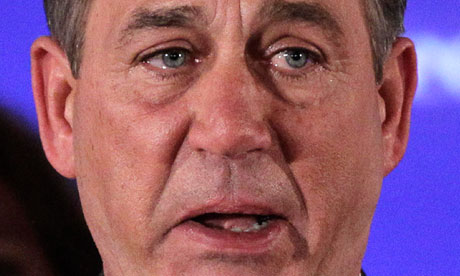 What’s in store for Barack Obama as 2011 opens? Forget the nicey-nice tenor of the lame-duck session. As of tomorrow the new Congress is sworn in. Republican John Boehner takes the gavel out of Nancy Pelosi’s hands and will preside over the House of Representatives, a body that has 63 more Republicans than it did last year. Over on the Senate side of the Capitol building, the Democrats are still the majority, but the Republicans number 47 rather than 42, and among the new faces are several hard-right tea-party types. The era of co-operation (that glorious two-week interval!) is over.
The big issue will be one with which British readers may be familiar: the budget. The deficit hovers well north of $1tn. Medicare, the elderly public-insurance plan paid for through payroll taxes, is in parlous fiscal shape. Social security it is not, really, but a lot of people believe it is (or say they do). So now that the Republicans are in a position of real power, they will push Obama and the Democrats for severe spending cuts.

They will be looking for concessions on social security that will probably include raising the retirement age. As for Medicare, its fate is also wrapped up in the healthcare bill, which many new Republicans hope to repeal, and which the supreme court may partially invalidate as unconstitutional sometime this year.

For their part, Democrats will push back on two fronts. First, that the Pentagon not be spared the budget knife. Democrats say, yes, we’ll take a look at outlays for liberal things like environmental protection and poverty fighting, but the military needs to be on the table too. Second, many Democrats will simply be dead set against any tinkering with social security. To liberals, an increase in the retirement age is a benefits cut, since such an increase slices a year or two or three out of the time window during which people will receive benefits.

Into this already roiling mix, toss a vote on raising the country’s debt ceiling. Many of the new conservatives, haters of government spending, say they will vote no. If Congress fails to raise the ceiling, bond markets and economies the world over would be threatened. Everyone in Washington presumes that a very-high stakes poker game combining all these elements will be played, probably sometime this spring.

All this will be managed by a White House team that will be, to some extent, new, as a staff shakeup is expected soon. What’s no longer new, of course, is Obama himself. He’s been at this two years now and hasn’t handled the political messaging very well. We’ll certainly be given the opportunity to see what he’s learned.