Libya cracks down on protesters after violent clashes in Benghazi

Reports of 38 injured in rioting after water cannon and teargas were used against estimated 6,000 people in Libya’s second city 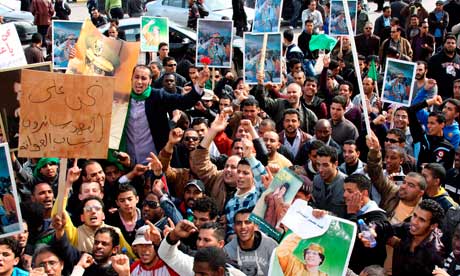 Hundreds of anti-government protesters clashed with police and government supporters in Libya’s second city yesterday as unrest spread across the Arab world.
Reports from the city of Benghazi said 38 people were injured in rioting after a human rights lawyer was arrested on Tuesday. Film footage captured screams and the sounds of gunfire as crowds scattered. Water cannon and teargas were used against an estimated 6,000 people. Some protesters armed with stones and petrol bombs had set fire to vehicles and fought with police in the city’s Shajara Square.
Opposition supporters accused the authorities of deliberately provoking trouble to spoil plans for a nationwide “day of rage” that had been called for .
“Last night was a bad night,” a Benghazi resident told Reuters yesterday. “There were about 500 or 600 people involved. They went to the revolutionary committee [local government headquarters] in Sabri district, and they tried to go to the central revolutionary committee … They threw stones.”
The semi-independent newspaper Quryna said 10 security personnel were injured in a protest begun by relatives of prisoners killed in a 1996 massacre who were demanding the release of their lawyer, Fathi Tarbel.
Libya al-Yawm also reported the arrests of journalists in Derna and al-Beida and the detention of writer Idris al-Mismari.
Al-Jazeera reported that at least two people were killed in clashes between Libyan security forces and demonstrators in the town of Bayda, east of Benghazi. The deaths come as hundreds of protesters reportedly torched police outposts in Bayda, while chanting: “People want the end of the regime.”
Facebook, Twitter and YouTube were all briefly blocked as were al-Jazeera and al-Arabiya. State TV showed crowds of pro-government supporters shouting slogans in Tripoli’s Green Square and in Sirte and Sebha.
But a video clip posted on YouTube showed a crowd of people outside what looked like a government building chanting: “Corruption is the enemy of God.”
The EU urged Libya to allow “free expression” and listen to protesters. Alistair Burt, a Foreign Office minister, urged Libya “to respect the right of peaceful assembly and freedom of expression, and on all sides to exercise restraint and refrain from violence”.
Sporadic trouble has been reported from Benghazi in recent weeks, and the latest outbreak was linked to anger over the massacre of over 1,000 prisoners at Abu Salim in 1996 – a bloody landmark in Muammar Gaddafi’s 42-year rule. But like previous unrest, it has so far remained local and has not coalesced into opposition at the national level.
“This could snowball into something big,” said Ashour Shamis, a veteran Libyan opposition activist. “There are grievances all over the country. But this looks like a spoiler by the government.”
Libya’s experience of the “Arab spring” could be different from that of its north African neighbours for several reasons. Its enormous oil and gas reserves and small population (6.5 million) mean it is relatively wealthy – four times as rich as Egypt – and can afford to buy off dissent.
It is also far less free than either of its neighbours, with a pervasive secret police and little in the way of a free media or independent institutions.