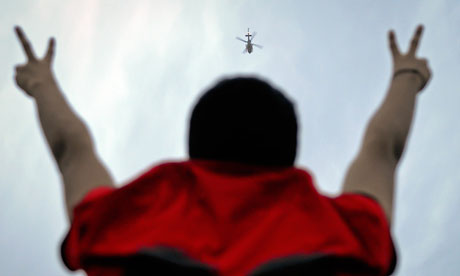 Saudi forces are preparing to intervene in neighbouring Bahrain, after a day of clashes between police and protesters who mounted the most serious challenge to the island’s royal family since demonstrations began a month ago.
The Crown Prince of Bahrain is expected to formally invite security forces from Saudi Arabia into his country today, as part of a request for support from other members of the six-member Gulf Co-operation Council.
Thousands of demonstrators on Sunday cut off Bahrain’s financial centre and drove back police trying to eject them from the capital’s central square, while protesters also clashed with government supporters on the campus of the main university.
Amid the revolt Bahrain also faces a potential sectarian conflict between the ruling minority of Sunnis Muslims and a majority of Shia Muslims, around 70% of the kingdom’s 525,000 residents.
The crown prince, Salman bin Hamad al-Khalifa, said in a televised statement that Bahrain had “witnessed tragic events” during a month of unprecedented political unrest.
Warning that “the right to security and safety is above all else”, he added: “Any legitimate claims must not be made at the expanse of security and stability.”
The crown prince has also promised that national dialogue would look at increasing the power of Bahrain’s parliament, and that any deal could be put to nationwide referendum.
However, some protesters have pressed their demands further to call for the toppling of the Sunni dynasty.
The unrest is being closely watched in Saudi Arabia, where Shia are some 15% of the population.
The secretary general of the Gulf Co-operation Council, Abdulrahman bin Hamad al-Attiya, expressed the “full solidarity with Bahrain’s leadership and people”, adding that “safeguarding security and stability in one country is a collective responsibility”.
In an apparent reference to Iran, which Gulf Arab ruling elites fear may capitalise on an uprising by Shiites in Bahrain, he also expresssed “strong rejection of any foreign interference in the kingdom’s internal affairs, asserting that any acts aiming to destabilise the kingdom and sow dissension between its citizens represent a dangerous encroachment on the whole GCC security and stability.” Reports that the Saudi National Guard was poised to enter Bahrain were cited by the Foreign Office, alongside a recent increase in protests, as it changed its advice to advise British citizens against all travel to Bahrain.