[1]Katherine Marsh in Damascus and agencies 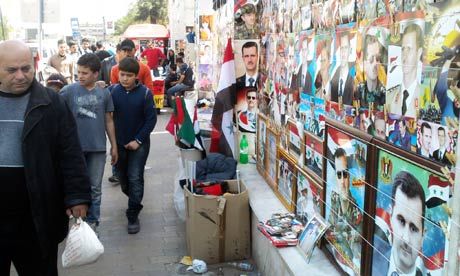 Syrian human rights organisation Sawasiah said that at least 500 civilians have been killed in the protests. Photograph: AP

Hundreds of President Bashar al-Assad’s ruling Ba’ath party have resigned in protest at an increasingly bloody crackdown on pro-democracy protesters that is believed to have claimed at least 500 lives.
News of the resignations emerged as a deeply divided UN security council failed to agree on a European and US-backed statement condemning the government’s use of violence.
The draft – proposed by France, Britain, Germany and Portugal – was opposed by several within the 15-member security council, including Russia, Lebanon and India.
Alexander Pankin, Russia’s ambassador to the UN, warned that a “real threat to regional security could arise from outside interference in Syria’s domestic situation”.
France, Britain, Germany, Italy and Spain summoned Syrian ambassadors in their countries to tell them they condemned the violence and said Assad must change tactics.
In a potential embarrassment for the British government, it emerged that Sami Khiyami, the Syrian ambassador to London, was still on the guest list for the royal wedding. The Foreign Office later announced that it had decided, with the agreement of Buckingham Palace, that the presence of the ambassador would be “unacceptable” and that he should not attend.
Meanwhile, the University of St Andrews, where Prince William and Kate Middleton studied, has announced it is to review the financing of one of its Syrian studies centres after the Guardian revealed that funding was arranged with Khiyami’s help.
Syrian human rights organisation Sawasiah said on Thursday that at least 500 civilians have been killed in the protests. Sawasiah, which was founded by jailed Syrian human rights lawyer Muhannad al-Hassani, also said thousands of Syrians have been arrested and scores have gone missing after demonstrations demanding political freedom and an end to corruption erupted almost six weeks ago.
Syria’s UN ambassador, Bashar Ja’afari, welcomed the UN’s inaction, and blamed the violence on “extremist groups”.
But while the international community failed to condemn the violence, signs of dissent within government ranks started to grow as more than 230 members of the monolithic party that has ruled Syria since 1963 announced their resignation.
“Considering the breakdown of values and emblems that we were instilled with by the party and which were destroyed at the hand of the security forces … we announce our withdrawal from the party without regret,” 30 party members from the coastal city of Banias said in a letter.
They accused security forces and pro-government gunmen of opening fire at homes, mosques and churches and inciting sectarian strife between the country’s Sunni majority and President Assad’s minority Alawite sect, an offshoot of Shia Islam.
The city – which sits near the Alawite’s mountain heartland – has seen repeated street protests, which have been met with gunfire, raids and mass arrests by the security forces.
About 200 members from the southern Hauran region – which includes the besieged city of Deraa – also stood down, citing the Ba’ath party leadership’s complicity with “crimes of the Syrian intelligence agencies”.
Deraa, where protests against the Assad regime began six weeks ago, has been surrounded by troops for days, and residents are reportedly running out of food, water and medicine.
Gunfire and sporadic explosions were heard in the city on Wednesday night, after dozens of tanks were seen heading to the city.
“We have no electricity, no water, no telephones and no bread,” resident Abdullah Abazeid told the Associated Press by satellite telephone. “The situation is terrible.”
Bodies of protesters killed by security forces are reportedly being stored in refrigerated trucks, and residents reported that snipers were firing at people in the streets.