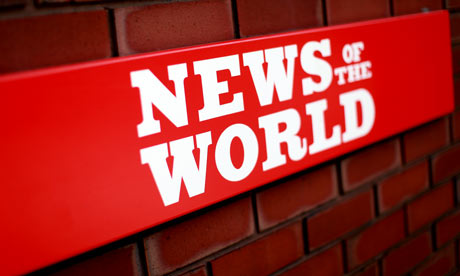 News International’s claims of cooperating with police over phone hacking scandal brought into question. Photograph: Graeme Robertson
Police are investigating evidence that a News International[1] executive may have deleted millions of emails from an internal archive in an apparent attempt to obstruct Scotland Yard’s inquiry into the phone-hacking scandal. The archive is believed to have reached back to January 2005, revealing daily contact between News of the World[2] editors, reporters and outsiders, including private investigators. The messages are potentially highly valuable both for the police and for the numerous public figures who are suing News International (NI).
According to legal sources close to the police inquiry, a senior executive is believed to have deleted “massive quantities” of the archive on two separate occasions, leaving only a fraction to be disclosed. One of the alleged deletions is said to have been made at the end of January, just as Scotland Yard was launching Operation Weeting, its new inquiry into the affair. The allegation directly contradicts NI claims that it is co-operating fully with police in order to expose its history of illegal newsgathering.
The alleged deletion of emails will be of particular interest to the media regulator Ofcom, which said it had asked to be “kept abreast” of developments in the Met’s hacking investigation, so it can assess whether News Corp would pass the “fit and proper” test that all owners of UK television channels have to meet.
That came amid the first signs that Rebekah Brooks’s grip on NI was weakening on a dramatic day when David Cameron all but called for her resignation. It also emerged that Brooks was no longer in charge of the company’s three-person in-house standards committee that is tackling the hacking issue, and that Rupert Murdoch is planning to fly into London on Sasturday to confront the crisis.
Earlier on Friday, the prime minister told reporters at an emergency press conference on the crisis on Friday morning: “It’s been reported that [Brooks] had offered her resignation, and in this situation I would have taken it.” Although NI denies that she offered to resign, Cameron’s meaning was clear as he tried to distance himself from a person with whom he has a close social relationship.
The scandal brought a number of arrests on Friday, with the prime minister’s former PR chief Andy Coulson held under suspicion of involvement in phone hacking[3]. As he was released on bail, he told reporters: “There is an awful lot I would like to say, but I can’t at this time.” Clive Goodman, the NoW’s former royal reporter, was also arrested in relation to the alleged payment of bribes to police, and subsequently bailed. And last night an unnamed 63-year-old man was also arrested in connection with alleged corruption.
Cameron yesterday announced that his administration will launch a full judicial review into phone hacking defended his hiring of Coulson, and in effect announced that the Press Complaints Commission would be scrapped after 20 years and replaced by a new regulatory body independent of the newspaper industry and the government. He said all party leaders had been “so keen to win the support of newspapers[4] that we turned a blind eye to the need to sort this issue”.