Tony Blair: New Labour died when I handed over to Gordon Brown 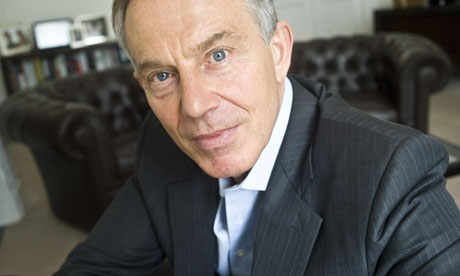 Former prime minister Tony Blair at his home office in Grosvenor Square, London. Photograph: Rex Features
Tony Blair has delivered his most damning verdict on Gordon Brown’s government to date, claiming New Labour died when he left office in 2007 and that the party “lost its driving rhythm”.
The former prime minister said the 13-year Labour government should be remembered in two phases – his and Brown’s – and there was “no continuity” between the two. In a speech in London to the New Labour thinktank Progress, Blair also advocated a “pick and mix” of policy that did not adhere to old narratives of left and right. He urged the party to let go of some of its old ideologies in order to arrive at the “right” policy decisions.
He said: “I remain unremittingly an advocate of third-way, centre-ground, progressive politics that came to be called New Labour. From 1997 to 2007 we were New Labour. In June 2007 we stopped.
“We didn’t become old Labour exactly. But we lost the driving rhythm that made us different and successful. It was not a government of continuity from 1997 to 2010 pursing the same politics. It was 10 plus three.”
It is the most comprehensive analysis Blair has made distinguishing between his and Brown’s premiership. He also stressed his support for the Labour leader, Ed Miliband, but warned that the party could not indulge in the “politics of protest”.
He said: “Parties of the left have a genetic tendency to cling to an analysis that they lose because the leadership is insufficiently committed to being left, defined in a very traditional sense. There’s always a slightly curious problem with this analysis since usually they have lost to a rightwing party. But somehow that inconvenient truth is put to the side.