Tariq Jahan lost his son, Haroon, in a hit and run incident during the riots in Winson Green, Birmingham on Wednesday 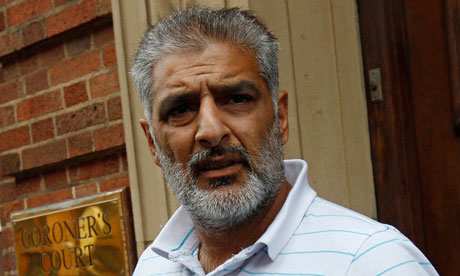 Tariq Jahan’s son, Haroon, was killed in a hit and run incident during the riots in Birmingham. Photograph: Darren Staples/Reuters
After the evening prayers at the mosque,
came the looters in masks,
and you three stood,
brave, bright, brothers,
to be who you were –
a hafiz is one who has memorised
the entire Koran;
a devout man –
then the man in the speeding car
who purposefully mounted the kerb,
think we all should kneel
on that English street,
where he widowed your pregnant wife, Shazad,
tossed your soul to the air, Abdul,
and brought your father, Haroon, to his knees,
his face masked in only your blood
on the rolling news
where nobody’s children riot and burn.