Kurds in Turkey: arrests and violence threaten to radicalise a generation 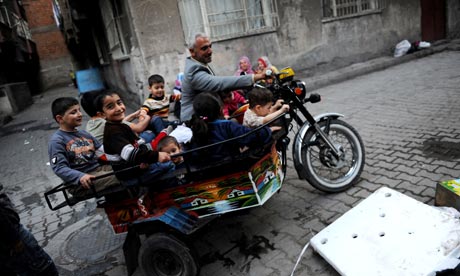 Children enjoy a motorbike ride in Diyarbakir, a mainly Kurdish city in south-eastern Turkey where a courtroom has been built for the mass trial of more than 150 Kurdish politicians and activists.
Photograph: Bulent Kilic/AFP

Since the beginning of the Arab uprising Turkey has been held up as a blueprint for the emerging Middle Eastern democracies to copy. But many observers question whether its treatment of its Kurdish minority gives it the right to be treated as a role model.
This year more than 4,000 people have been arrested under arbitrary terrorism charges, including dozens of journalists arrested last week, military operations against Kurdish separatists have intensified, with at least 27 killed in December alone, and guerrillas have stepped up violent attacks on security forces and civilians.
Mass trials of Kurds, including local deputies, mayors, academics and human rights activists, have inched forwards. In the biggest case, more than 150 politicians and activists are being tried in a specially built courtroom in Diyarbakir. More than 100 of the defendants have been in pre-trial detention, some of them for many months.
Abdullah Demirbas, the mayor of a district in the mainly Kurdish city of Diyarbakir in eastern Turkey, is among the defendants on trial for “membership in the KCK”, an illegal pan-Kurdish umbrella organisation that includes the armed Kurdistan Workers’ party (PKK).
If convicted, he faces 35 years in jail on these charges alone.
“They have not even found a pocket knife in my house,” Demirbas said. Human rights groups have repeatedly expressed their concern[1] about the arbitrary use of terrorism laws in Turkey.

“The Turkish laws make no distinction between political activity and terrorism. It is never examined in what kind of activities people are actually involved and whether these qualify them for prosecution. Very many of these cases are based on guilt by association,” said Emma Sinclair-Webb, the Turkey researcher for Human Rights Watch.

“People have a right to association. You may not like what people are associating with, but it is illegitimate to just jail, suppress and silence critics.”

Demirbas fears that the massive repression of politicians and human rights activists will decrease confidence in politics and lead to more violence: “A state that wants to end violence should widen the political sphere as much as possible, so that people who used to feel compelled to use armed force will turn to dialogue instead.

“But [Turkey] does exactly the opposite: they arrest more than 4,000 people that have never held a weapon, so people will think: ‘If we enter politics, we will end up like that.'”

Demirbas does not need to look far for examples: he was given a prison sentence of two years and six months after saying, in May 2009, that “a soldier’s and a guerrilla’s mother’s tears are the same colour. This war needs to end”.

Three weeks later his then 16-year-old son joined the PKK.

“He told me: ‘Dad, see this is what happens when you try to do politics. This state does not understand politics, it only understands weapons.'”

Demirbas said that he tried in vain to persuade his son to stay.

“That is the psychology of thousands of Kurds. I know of at least 2,000 young Kurdish people who have [joined the PKK] since then.”

Mehmet Emin Aktar, president of the Diyarbakir Bar Association, said that Turkey had become “a republic of fear”.

He says: “A democratic state needs to provide a trustworthy judiciary. People need to know that they can expect justice if they step in front of a judge. But this is no longer the case.”

Like many of his colleagues, he is very worried that the situation will reach a breaking point: “If fear and threats continue to be the main method of the government, the younger generation of Kurds will become more radical.”

In the cafeteria of the Dicle Firat cultural centre, a group of men were discussing the latest KCK arrests. “We all have our bags packed,” Kazim Öz said. “We now live on the assumption that each and every one of us could be arrested at any minute.”

Another man nodded. “Where is this supposed to end? They can’t arrest all of us! This morning I counted 36 grandchildren. They can’t finish us Kurds like this.”

With tensions turning violent again, investment and business development in Diyarbakir has stalled, making unemployment and poverty, for decades a major problem in the predominantly Kurdish south-east, ever more acute.

With prejudice fuelled by the Turkish media, discrimination against Kurds continues.

“Those who conduct business outside Diyarbakir province will not register their car here,” said one local Turkish Kurdish politician from the ruling AKP party. “The ’21’ on your licence plate is often enough to get randomly pulled over and fined. It’s just not worth the trouble.”

Most people agree dialogue must be reopened and that the Democratic Opening, an ill-fated attempt at rapprochement launched at the end of 2008, was on the right lines.

Recent reports have indicated the AKP may be on the verge of a new peace overture.

“The AKP is wrong when they think they can destroy the PKK through military force,” said Vahap Coskun, assistant professor at the Diyarbakir Dicle University. “The PKK’s strength does not stem from the approximately 5,000 fighters in the mountains, but from its widespread legitimacy among an important part of the population. For every fighter that they kill, another will go to join them.”

Coskun said that the PKK, too, was making a mistake in escalating attacks and violence. “People here are tired of fighting. The PKK’s attempts to use the momentum of the Arab spring to incite people to revolt have failed.”

He believes that the Kurdish-aligned Peace and Democracy BDP party should encourage peaceful civil disobedience campaigns again, and keep young Kurds from taking up arms.

“There is a massive potential: they have a party, civilian organisations, media, and a very young and mobile mass of people,” he said. “If they manage to gather 10,000 people in the streets of Diyarbakir, peacefully demanding mother tongue education, the government would have to acknowledge their request.”

In his butcher shop in the Diyarbakir city centre, Metin Özsanli, who is a member of the peace committee that has been arbitrating blood feuds, says: “My father has ended 250 blood feuds, and I have ended 65. It is incredible to see that capacity for forgiveness in people.”

He added: “We have to talk to both families many, many times, visit them both many times – when only one person has been killed. But over 40,000 people have died in this conflict.

“Prime minister [Recep Tayyip] Erdogan should not give up this easily. It will take many more talks with both sides to end this feud, but I am hopeful that it will end one day.”