Residents in Homs and Hama report shelling and tanks on streets as tensions grow over shooting at a Turkish refugee camp Peter Walker, Ian Black and agencies 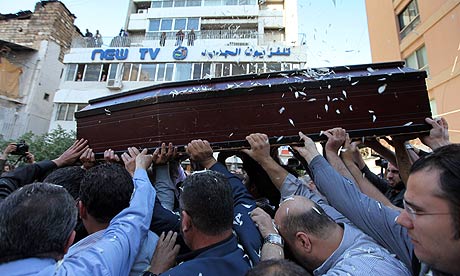 A UN-imposed deadline for a ceasefire in Syria has passed with government forces again shelling the central city of Homs, with no sign of an end to the crackdown that has killed an estimated 9,000 people over the past 13 months.
As Homs residents reported intermittent shelling and mortar fire on Tuesday morning, Turkey[1]‘s foreign minister cut short a visit to China after Syrian forces fired across the border into a refugee camp[2].

Ahmet Davutoglu, in China with the Turkish prime minister, Recep Tayyip Erdogan, will return home to co-ordinate the response to Monday’s incident near the town of Kilis in Turkey’s south-western Gaziantep province. A Turkish foreign ministry official said at least five people were injured, including two Turkish nationals. Speaking to reporters in Bejing Tuesday, Erdogan said his country was considering its response, including measures “we don’t want to think about”.

It had been clear for some time that little was likely to come from the 6am Tuesday deadline for government troops and the rebel forces opposing them to lay down their arms, under a six-point peace plan by the UN-Arab League envoy to Syria, Kofi Annan. Syria’s president, Bashar al-Assad[3], had demanded written guarantees that armed groups would first lay down their weapons. This was swiftly refused.

Residents in Homs, the centre of the anti-Assad uprising, which has faced weeks of bombardment from government troops, said shelling was continuing, while people in Hama, reported hearing tanks still patrolling the streets. “Shelling woke me this morning at 8.30 and I can now hear one shell every 10 minutes or so,” Waleed Fares, a resident of Homs told Reuters.

The London-based Syrian Observatory for Human Rights said most cities were relatively calm on Tuesday following significant bloodshed in recent days, but reported no clear sign of troop withdrawals.

Similarly, there were no reports of a ceasefire by the rebel Free Syrian Army, which has refused to stop fighting until it sees signs of a withdrawal by government forces.

The shooting across the Turkish border, along with an incident in which Syrian troops fired into northern Lebanon[4], has caused further international alarm.

The former is the first such incident since Turkey began sheltering thousands of Syrians last summer. Washington expressed outrage, saying the Syrian government appeared to be showing little commitment to Annan’s peace plan.

Mohammad Abdelqader, a refugee in the camp, told Reuters he had witnessed the shootings on Monday and that two Syrians had been best online pokies australia[5] killed and two more injured. Annan is expected to visit the border on Tuesday. Two prominent American senators, John McCain and Joe Lieberman, are also expected to visit.

Lebanon’s al-Jadeed television channel said one of its cameramen, Ali Shaaban, had been shot dead near the border between the two countries. Syrian troops fired about 40 rounds across the border into northern Lebanon, killing Shaaban, Associated Press reported. “If you see the car, you would think it was in a war zone,” Shaaban’s colleague, Hussein Khreis, told the station.

Analysts suggested that, having apparently missed one deadline for a withdrawal and ceasefire, it will not be easy for Annan to set another given the profound lack of trust between the Syrian parties. Speculation is rife about a Turkish plan B, perhaps involving the establishment of a border buffer zone.

The effective collapse of the Annan plan, sponsored by the Arab League as well as by the UN, means that western and Arab governments are likely to seek a return to the UN security council, though there is no sign that Russia and China will reverse their opposition to censuring or sanctioning the Assad regime.

On Tuesday, China reiterated its call for both sides to comply immediately with the Annan plan.

Syrian state media insisted on Monday that the Assad government stood by its commitment to the Annan plan and blamed “armed groups” for failing to provide written guarantees that they would stop fighting before regime forces withdrew from cities[6].

Human Rights Watch, meanwhile, claimed in a report that Syrian security forces had summarily executed more than 100 civilians and wounded or captured opposition fighters during recent attacks on cities and towns. Many of the incidents took place in March this year, it said.

In the cases documented by the organisation, at least 85 victims were Syrians who did not take part in fighting, including women and children. The report describes in detail several cases of mass executions of civilians, including the killing of at least 13 men in a mosque in Idlib on 11 March, the execution of at least 25 men during a search-and-arrest operation in Homs on 3 March, and the killing of at least 47 people, mainly women and children, in three neighbourhoods of Homs on 11 and 12 March.