Ali Hasan says he was just playing in the street when he was arrested. He was ‘forced’ to confess and was detained in jail 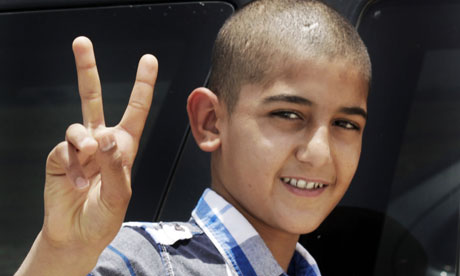 Ali Hasan after his release on bail. Photograph: Hasan Jamali/AP

At a time when most 11-year-old boys are looking forward to the school holidays, Ali Hasan is preparing for his trial.

On Wednesday morning the primary school pupil from suburban Manama will stand in a Bahrain[1] court and listen as the case against him is spelt out. The prosecution case: that Ali helped protesters block a street with rubbish containers and wood during demonstrations last month. Ali’s defence: that he’s a child who was just playing with friends in the street.
“On the day before I was arrested there was some fighting in the streets near my house between the demonstrators and the police,” Ali told the Guardian by phone from his home in the Bilad al-Qadeem suburb. “The demonstrators had blocked the street by setting fire to tyres and using containers in which people dispose of their rubbish.

“The day after this I went to the street with two of my friends to play. It was around 3pm. While we were playing there, some police forces came towards us which made us panic. My friends managed to run away … but I was so scared by the guns they were carrying that I couldn’t move … and I was arrested.”

Bahrain’s rulers have proved ruthless in the cases they have pursued against those accused of involvement in 15 months of protests against the Khalifa dynasty[2], with prosecutions against doctors, nurses and rights activists. Ali Hasan’s case marks a new precedent in the legal crackdown against civil society. He is believed to be the youngest Bahraini to stand trial in connection with the uprising.

Ali has already spent weeks in jail before he was bailed last week, and even sat his exams in prison. After his arrest he was taken to various police stations where he said he was forced to confess to taking part in anti-government demonstrations. “I was crying all the time. I told them I’d confess to anything to go back home,” he said.

Ali’s father, Jasem Hasan, a car parts dealer, said his son was taken back to the detention centre the day after his arrest.

“I was abroad at the time and when I called Ali’s mother was only crying. She was crying for all the time Ali was in prison,” he said.

In jail Ali spent a month in a room with three other children and was made to clean the centre. “We would wake up early in the morning for breakfast, usually around 6.30, and then I had to do some job,” he said. “The first day in jail was horrible. I cried all the time but I became friends with the other boys there and we could play for four hours every day – but had to spend all our other time in a locked room.” Describing the centre, he said: “It’s like putting a bear in a box, I felt just like that. I never want to go back to that place again.”

Bahrain’s chief prosecutor for those under 18, Noura Al-Khalifa, has said that Ali was detained while blocking the street and Bahraini information officials have alleged that Ali was participating in an “illegal gathering” along with other protesters. Ali’s father said the allegations were lies. “They claimed that my son had accepted money in exchange for setting fire to tyres and blocking the road,” he said. “I don’t say I’m a rich person but I make enough money and my son doesn’t need to go in streets looking for money. I always give enough money to him.”

Ali’s lawyer, Mohsen al-Alawi, said the boy was nothing to do with the demonstrations. “Ali was not a political activist or a demonstrator. He was only playing games like all other children of his age.”

Human Rights Watch[3] has expressed concerns about Ali’s case. “He was not accompanied by a lawyer during his questioning,” said HRW’s Mariwan Hama-Saeed. “It seems the only evidence used against him is his own confession and the testimony of a police officer.”

The UK and US governments have been criticised for maintaining close relations with the Bahraini leadership, and failing to address human rights[4] abuses in an uprising that has left scores dead[5]. The Foreign Office minister for the Middle East, Alistair Burt[6], who visited Bahrain last week, encouraged further reform in the country, saying that it was “clear there is much more to do”.

Burt said: “While the Bahraini government has made some good progress on the recommendations of the Bahrain independent commission of inquiry (BICI), we are clear there is much more to do. Bringing about sustained, comprehensive reform will take time, but the government should build on the steps they have taken and ensure that BICI recommendations are implemented quickly and in full, including where they relate to human rights.

“We stand ready to assist Bahrain as it tackles the challenges ahead, including help with reform of the judicial system, promoting human rights training in the police and other government services, and reducing sectarian tension through reconciliation.”

The Foreign Office did not respond to the Guardian’s request for comments on Ali Hasan’s case at the time of publication.

Hassiba Hadj Sahraoui, deputy director for the Middle East and North Africa[7] programme at Amnesty International, said: “Arresting an 11-year-old boy, interrogating him for hours without a lawyer before trying him on spurious charges shows a jaw-dropping lack of respect for his rights.”

She added that such treatment was completely out of step with international standards, or even Bahrain’s own penal code. “This case shows the excessive means the Bahraini authorities have resorted to in order to crush protest. I hope they will see sense and drop all the charges against Ali Hassan.”