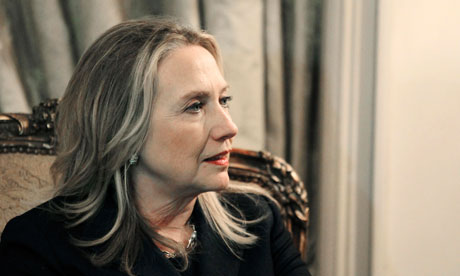 The United States supports the full establishment of democratic rule in Egypt and the return of its military to an exclusively national security role, US secretary of state Hillary Clinton said on Saturday.

Making her first visit to Egypt since the inauguration of President Mohamed Morsi two weeks ago, Clinton stressed, however, that it was entirely up to Egyptians to decide their future. Clinton met Morsi on Saturday in the highest level meeting yet between a US official and a Muslim Brotherhood politician whose first days in office have been marred by a power struggle with Egypt’s still influential army leadership.
She reiterated Washington’s support for a country that was a cornerstone of US policy during Hosni Mubarak’s three decades in power but is now led by a man from a group outlawed during his rule.
Clinton is due to meet on Sunday with Hussein Tantawi, the head of the council of generals that oversaw the transition from Mubarak’s rule.
“The United States supports the full transition to civilian rule with all that entails,” Clinton said during a news conference after her meeting with Morsi, commending the military council for its role during Egypt’s transition.

“But there is more work ahead. And I think the issues around the parliament, the constitution have to be resolved between and among Egyptians. I will look forward to discussing these issues tomorrow with Field Marshal Tantawi and in working to support the military’s return to a purely national security role.”

The army, which has been at the heart of power for six decades, moved to limit the power of the new civilian president even as voters were lining up to elect him, while enhancing their own authorities in a constitutional decree.

The generals also dissolved the Muslim Brotherhood-led parliament on the grounds of a court ruling that had deemed the rules by which it was elected as unconstitutional.

But Morsi quickly challenged that decision, issuing a decree summoning the disbanded parliament just days after he took office and raising the heat in the power struggle.

Speaking ahead of Clinton’s arrival, senior US officials said she would urge Egypt’s civilian and military leaders to work together to complete a full transition to democratic rule.

“She is going to say, you have to stick with it. You have to keep going,” a senior US official, speaking on condition of anonymity, told reporters travelling with Clinton.

“It is crucial that all of the stakeholders who need and have a voice in Egypt’s transition engage in a dialogue to answer the complicated questions around parliament and the constitution.

“So she will encourage Tantawi, as she will encourage Morsi, and civil society, to engage in that dialogue and to avoid the kinds of confrontation that could potentially lead to the transition veering off track,” the official added.

The United States long held the Brotherhood at arm’s length and Clinton was asked if she regretted that successive administrations had supported a government in Egypt that worked to repress and marginalize the group, at times imprisoning now President Morsi.

“We worked with the government of the country at the time. We work with governments around the world. We agree with some of them. We disagree with others of them,” said Clinton.

“We were consistent in promoting human rights and speaking out for an end to the emergency law, an end to political prisoners being detained.”

She also said Morsi must stick by his commitment to uphold Egypt’s international commitments, which include the 1979 peace treaty with Israel.

“Mohamed Morsi has repeatedly announced on all occasions that Egypt respects all peace treaties that Egypt is a party to as long as the other party also respects them,” he said.

Morsi had also made clear that Egypt remained committed to the establishment of a Palestinian state in the West Bank and the Gaza Strip with East Jerusalem as its capital, he said.