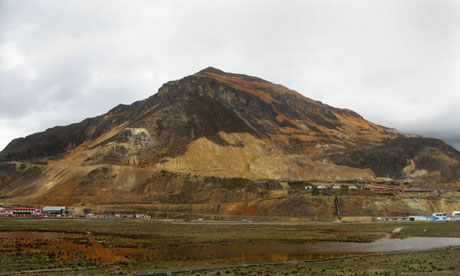 Toromocho’s town of Morococha will be swallowed up by a mining crater in eight years’ time, Chinalco says. Photograph: Dan Collyns

They call the mountain Toromocho, which means “bull without horns”. But to its new, Chinese owners, the name is irrelevant: the rugged peak is packed with copper, silver and molybdenum, an element used in alloys. It could be worth as much as $50bn (£30bn). Toromocho must go.

And so must the people living there. The nearby ramshackle town of Morococha is home to 5,000 people. With adobe and brick houses, intermittent electricity and no running or safe water, theirs is no life of ease; the town’s got to go, too.
But not everyone wants to leave. Despite a huge effort by the Chinese to build a new town six miles down the road, locals are sceptical. Last month, police ejected dozens of residents from a roadblock on Peru[2]‘s central highway, which passes the town.

“All this move has created is fights and divisions,” said Aina Calderón, a 67-year-old lifelong Morococha resident. “The company doesn’t respect that some of us don’t want to leave.”

Razing a 4,000-metre mountain or building a town from scratch: it’s hard to say which is the more remarkable feat about this endeavour, which better epitomises the good and bad aspects of the booming world. The Chinese mining[3] giant Chinalco[4] will start scraping the landscape next year, having bought the land for $860m and invested $2.2bn in the mine. The old town will be swallowed up by the opencast mine’s crater, from which will be extracted 1m tonnes of copper, 10,000 tonnes of molybdenum and 4m ounces of silver every year for 35 years.

No less impressive is the urban order of Carhuacoto. Company officials say it is the most planned town in Peru. Carhuacoto has street lighting, green areas, a modern sewage system and a state-of-the-art waste-water treatment plant. It has a canal built to prevent the town being flooded if a nearby dyke collapses in an earthquake. It also has a police station, a health clinic, spacious, well-equipped primary and secondary schools and, rather amazingly, seven churches, to cater for faiths ranging from Roman Catholicism to Jehovah’s Witnesses. The only thing it lacks, so far, is people.

The vast majority of the residents who were tenants in Morococha will become rent-free homeowners for the first time in Carhuacoto. The Chinese firm is even paying for lorries to move their belongings to 1,050 new two-storey homes with 24-hour electricity and indoor plumbing.

But some residents, such as Zuly Espinoza, a 22-year-old miner’s wife with an infant son, say they have not been allocated a house in Carhuacoto. “There’s not enough houses. Where will we go when they destroy the town?” she asked. Others claim incomers have moved into the old town just so they can win a rent-free home in the new one.

Lisette Meza, community relations manager for Chinalco, said complaints from those who said they had not got houses would be evaluated. “There are a lot of expectations with a project as big as Toromocho,” she said. But the process had been “transcendental”, because it was the first time civil society had worked so closely with a mining firm in Peru.

Chinalco has been thorough in trying to earn its “social licence” – trying to buck the trend of multibillion-dollar investments being stalled by conflicts with local communities in Peru’s decade-long mining bonanza. The biggest mining investment in the country’s history, the $4.8bn planned Conga mine[5], has been paralysed by local opposition. Official figures show 17 people have been killed in conflicts since President Ollanta Humala took office in July 2011, compared with 191 under his predecessor, Alan García. There were 167 conflicts over natural resources in October, according to Peru’s human rights ombudsman, La Defensoría del Pueblo[6].

To that end, Chinalco has employed Social Capital Group[7], a consultancy that says it promotes the “social sustainability of large-scale projects”. The firm has worked with universities and technical institutes to train Morococha residents in running small businesses, as well as running health and education programmes.

“With a planned consensual relocation of a town, Chinalco is really trying to raise the standard in the industry,” says Cynthia Sanborn, a US academic[8] and author of a book on Chinese mining in Peru. “There are other companies in Peru which have to move towns and people out of the way, and everyone is watching this experience to see how it goes,” she said.

Gradually, families are moving in. Some complain their new homes are too small, even though they come with a detachable roof so a third floor can be added. But others were happy to leave the old town. “We always lacked basic services in Morococha, no matter who the mayor was,” said Felix Quispe, a metalworker who has turned half of his new home into a workshop. “The move means a better future for us.”

In Morococha, removals workers traipse in and out of the gloom of Cesar Llauce’s damp, single-storey terrace as his four-year-old grandson stands by the doorway holding a toy microphone. “We’re tired of the discomfort. We want a better life over there,” he said. “It’s a little sad – my children grew up here. But I hope the move will be better for us and all our neighbours.”

But while some families are moving several hundred residents are still reluctant to go. The town’s mayor of eight years, Marcial Salomé, wants Chinalco to pay compensation of $300m to the town for the “loss of identity, culture and tradition” from the move.

The figure was negotiable, but the issue of guaranteed jobs for all the new residents was not, he said. “The new home is not going to provide money so that a father can feed and educate his children. The company must give those fathers work: stable, permanent positions.”

A company official said: “Chinalco won’t force anyone to leave.” But anyone remaining, he added, would have eight years before the crater reached town.