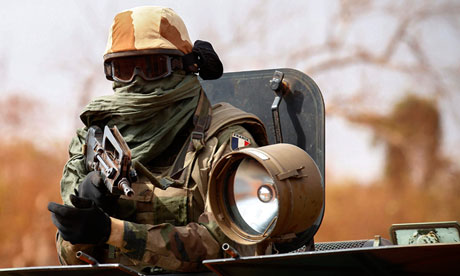 French and Malian forces continued their advance northwards after seizing back the towns of Gao, Konna and Diabaly from Islamist rebels.
Photograph: Nic Bothma/EPA

Just two weeks after intervening in Mali, French troops, together with the Malian army, have wrested back control of most of the north of the country from Islamist rebels.

At the weekend the French seized back Gao – under jihadist control since last April – securing the airport and the bridge across the Niger river. Thousands of residents turned out to celebrate, shouting “Liberté!” and “Vive la France!” The French suffered no losses with around a dozen “terrorists” killed, the French defence ministry said. The rebels were said to have fled on foot, or by camel, since there was no fuel.

At the same time, a column of French troops were trundling serenely towards Timbuktu, the remote Saharan town that has been a magnet for the intrepid and the foolhardy since the 19th century. French and Malian troops reached Timbuktu’s gates on Saturday, army sources said. The town’s maze of mud-walled mosques and sand-blown streets was deserted. Fighters from al-Qaida in the Islamic Maghreb (AQIM) that took Timbuktu last summer appeared to have left.
Elsewhere, French jets pounded the mountainous rebel-held town of Kidal. Mokhtar Belmokhtar, the AQIM commander behind the recent attack on the Amenas gas facility in Algeria in which 37 workers were killed, is said to be holed up there.

But despite these swift successes, it is uncertain whether France’s giddy military advance will deliver any kind of lasting peace. So far the “war” in Mali has involved little fighting. Instead Islamist rebels have simply melted back into the civilian population, or disappeared. Refugees who fled the rebels’ advance believe it is only a matter of time before the jihadists come creeping back. “The rebels haven’t gone far,” Mohamad Miaga, a 28-year-old secondary school teacher said. “They are in nearby villages.”

Miaga, who teaches English, fled his home in Gao last April. He now lives in a refugee camp in the government-controlled town of Sevare, home to around 4,000 refugees. French soldiers guard the nearby airport.

Last year some “200-300 pickup trucks laden with fighters” swept into Gao, he said, destroying buildings, including the town’s food security office, and firing randomly. When the rebels arrived, several terrified residents jumped into wooden boats and escaped to an island in the Niger. He left Gao two weeks later, as the price for a ride out of town soared.

“The rebels had big beards. They wore pantaloons. Their trousers didn’t quite reach their ankles. They were a mixture of foreigners and Mali people,” he noted. He added: “They imposed sharia law.”

Some of the jihadists were Tuareg, the lighter-skinned ethnic group who have been waging a bitter on-off secessionist war in the north of Mali for decades, and account for around 11% of the north’s population. The rebels who seized Gao came from the Movement for Tawhid and Jihad in West Africa[1] (MUJAO), a violent offshoot of AQIM.

At least two other rebel factions are active in northern Mali. One, the MNLA, is a Tuareg nationalist militia that fought the government but is now seeking an alliance with the capital. Another is Ansar Eddine, an Islamist group controlled by a former MNLA Tuareg leader, Iyad Ag Ghali. It was Ansar Eddine that seized the central town of Konna on January 10, prompting Paris, the former colonial power, to intervene.

France’s intervention in Mali, with 3,700 troops, has attracted broad international support. Britain has offered logistical help and two planes. One promptly broke down. The US has belatedly agreed to refuel French jets.

Western governments have treated the problem of growing Islamist extremism across North Africa as one of “terrorism”. David Cameron has talked of an “existential struggle”, warning it will take decades to defeat.

But in reality, the rebels’ earlier successes had less to do with hardline jihadist doctrine than with organised crime and drug smuggling. There is strong evidence, moreover, of collusion between the previous and possibly current Mali government and radical Islamist groups.

In recent years, western nations have secretly paid millions of dollars in ransom to various Al-Qaida-allied factions for the release of kidnapped nationals. Since 2008, around 50 westerners have been abducted in the region. Eleven are still being held. The biggest beneficiary of this lucrative industry has undoubtedly been AQIM.

It is this western cash – $40m to $65m since 2008 – that has enabled AQIM and other factions to capture the north. They bought weapons, especially after the ousting of Muammar Gaddafi, and political allies. The weapons facilitated their capture of Kidal, Gao and Timbuktu; the Malian army fled in disarray.

These shadowy groups have also reaped the rewards of another clandestine business: drugs. One police officer showed the Guardian a photo taken in Gao in 2008 of a warehouse stacked with neat rectangles of cocaine. He estimated its value to be $40m. The most expensive area of Gao, lined with colonial villas, is nicknamed “Cocainebougou” – cocaine town. The officer – speaking anonymously – admitted there was collusion between smugglers and state officials. He added: “[The police] destroyed a small bag to show the public. I’m wondering myself what happened to the rest.”

Since 2005-7, South American drug cartels have been using west Africa as a major transit route. Typically, the drugs arrive in small, dysfunctional west African coastal states, such as Guinea or Guinea Bissau, and are then shipped overland across the Sahel and Sahara to Europe. The route goes through Morocco, Algeria and Libya, often using ancient camel trails.

In 2009 a Boeing 727 landed near Tarkint, north of Gao, and got stuck in the sand. According to the United Nations Office for Drug Control, it was carrying up to 11 tonnes of cocaine. The traffickers collected the cargo, then torched the plane, nicknamed “Air Cocaine”. Mali’s president at the time, Amadou Toumani Touré, admitted that drug revenues were fuelling Mali’s spiralling insurgency.

Leaked US diplomatic cables reveal Washington’s increasing exasperation with Touré’s faltering government. They also complain about western countries including Austria and Canada that secretly paid ransoms to kidnappers. (The Swiss, by contrast, admitted publicly that they had stumped up $5m to secure the release of one of their nationals.)

Prior to the Islamists’ northern takeover, the US had provided training for the Malian army. During one visit, the head of the US’s Africa command, General William Ward, warned Touré that he needed to wrest back control of his “undergoverned territory”. Otherwise, Mali would continue to give “free rein to arms and drugs traffickers and terrorists”, Ward said.

But the White House’s stern warnings went unheeded. US diplomats had themselves figured out why. One cable noted: “It would be difficult for the [Mali] government to fully pursue AQIM, as there were a number of powerful and well-connected individuals who were profiting from Al-Qaida’s smuggling activities.”

By last year, events were running out of control. In March a group of low-ranking army officers toppled the president in a coup, after Tuareg rebels joined forces with the jihadists. Touré fled to Senegal.

His interim successor was badly hurt, when a mob stormed the presidential palace. The Mali army failed to protect him, probably deliberately. The country of 14 million, one of the poorest in the world, has yet to return to democracy, with France now coming to the aid of an unelected state.

Analysts are scathing about the west’s failures in Mali, which should be offset against France’s military success. “Western governments have been playing an overwhelmingly negative role by paying ransoms and supplying what is most likely AQIM’s and MUJAO’s most important sources of financing,” Wolfram Lacher noted in a September report for the Carnegie Endowment for International Peace.

For now, France is winning. But destroying a couple of AQIM bases and driving the rebels from Mali’s northern cities is the easy bit. The challenge will be holding on to the territory against a nebulous and cunning foe and, perhaps, somehow incorporating the rebels into a lasting political solution. That won’t be easy.

And then there is the miserably unclear fate of the western hostages. The 11 include nationals from France, South Africa, Switzerland and Sweden. All are tourists with a taste for adventure whose luck ran out. “After the war, they [the rebels] have something very important. They have the hostages,” a police officer involved in the successful 2009 hostage rescue said. “They are the ultimate bargaining card.”