Exclusive: Up to 600 people from 14 European countries have taken part in fighting since 2011, finds King’s College study 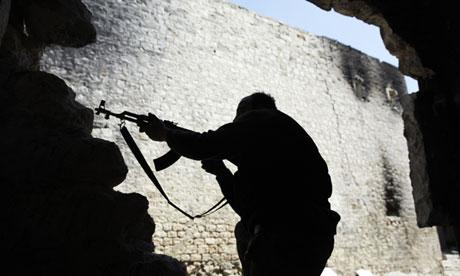 A fighter takes up position during combat in Aleppo, Syria. Photograph: Sipa/Rex

Hundreds of Europeans have travelled to Syria since the start of the civil war to fight against President Bashar al-Assad, the most comprehensive study of European foreign fighters to date has found.

A year-long survey by King’s College of more than two hundred martyrdom posts on jihadist-linked websites and hundreds of Arab and western press reports found that up to 600 individuals from 14 countries including the UK, Austria, Spain, Sweden and Germany, have taken part in the conflict since it began in 2011.

The largest contingent, the study found, came from the UK with estimates of fighters running between 28-134.

Based on their population, the figures for Belgium, the Netherlands and Ireland with up to more than 200 fighters between them, made these countries the most significant, the lead researcher, Professor Peter Neumann from the International Centre for the Study of Radicalisation (ICSR), at King’s college said.

European fighters made up to between 7 and 11% of the foreign contingent in Syria which ranged between 2,000-5,500 people. The researchers also said there are likely to be at least 110 named Europeans engaged in fighting currently.

They found that between 30-92 fighters were from France, 14-85 from Belgium and between 5-107 from the Netherlands. Other nations in the study included Albania, Finland and Kosovo.
Neumann said the wide variance in figures represented the difference between the team logging named individuals with a documented case history or death notice, and credible estimates from government officials at the higher end of the estimate.

“No one has really mapped it out across all of Europe,” Neumann said. “We’ve bought all these figures together… it’s a compilation of the open source data. We can say with certainty now that hundreds of Europeans have joined the fight in Syria.”

Neumann said the figures, though relatively small, showed how fast international jihadists had mustered in response to conflict.

“The mobilisation of this conflict is more significant that any of the recent conflict we’ve known about,” he said.

“The numbers are still quite small in terms of the overall percentage but in absolute numbers I think it is higher now than any other conflict since Iraq. But Iraq went on for years and years. But here we have in the space of a year effectively – since early 2012 – you can already speak of thousands of [foreign fighters]. In Iraq that took two or three years to reach that point so it is really significant.”

In February, the team discovered a post detailing the death of Ibrahim al Mazwagi – a 21-year-old British-raised Libyan who had been killed in fighting in Syria.

A photo of Mazwagi[1], who has been recorded as the first Briton killed fighting in Syria, showed him wearing the team shirt of his university American football team, the Hertfordshire Hurricanes[2].

Coach Jim Messenger said Mazwagi, who studied business administration at Hertfordshire University, had a number of good friends on the team.

“He was just one of the guys, same as everyone else,” Messenger said. “I believe that he shared a house at one time with some of them.”

He said Mazwagi stopped playing a year ago after he went to fight first in Libya before moving on to Syria. “We had a minutes silence before the game after we’d heard about the situation. I guess it was a little bit of a shock to a lot of the members on the team, young men on the team who’d never lost anybody that they knew before.”

Mazwagi’s friend Joe Thompson told the Sunday Times: “I don’t think there was a single person who wasn’t a fan of his.”

In the research for a forthcoming publication, The Syrian Jihad: how al-Qaida survived the Arab spring, the ICSR team also uncovered 249 foreign fighter martyrdom notices for which eight were for Europeans.

Neumann said the notices were an important source of information as jihadist groups, which like most conventional military outfits detailed their dead. “It sends an important message to people who are thinking of getting involved … that no one gets forgotten.”

Neumann said that in light of the findings it was wrong for the UK government to focus on Mali and the Sahel region.

Neumann said: “We’ve been so preoccupied with Mali.. the real story is Syria because people aren’t going to the Sahara. If you put yourself in the mind of a jihadist, you want to fight in the heart of the Arab world.”