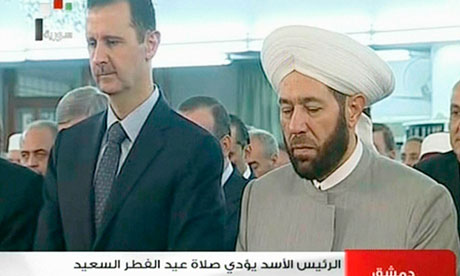 Syrian rebels said they fired rockets and mortar rounds on Thursday that hit a prestigious district of Damascus where President Bashar Assad was attending prayers to mark the start of a major Muslim holiday.

At least two Syrian rebel brigades claimed they hit Assad’s motorcade in the Malki district of the capital, but Syrian state TV broadcast images of the Syrian leader attending prayers, and the information minister denied reports that the president had been attacked.

However, it was not possible to determine if the footage of Assad praying was filmed before or after the attack.

Assad has a residence and an office in Malki, which has largely been sheltered from the shelling and battles that usually rage in the city’s impoverished suburbs. It was not clear if Assad has stayed in Malki in recent months.

It was the Syrian leader’s third public appearance in over a week as his regime tries to capitalise on recent gains on the battlefield against rebels fighting to oust him from power.

Information minister Omran al-Zoubi dismissed the attack claims as rumours and told state TV that Assad drove his own car to the Anas bin Malik Mosque, located in the heart of Malki.

In the state TV broadcast, Assad, dressed in a suit, was seen praying alongside Syria[1]‘s grand mufti at the start of Eid al-Fitr, the three-day holiday that ends the holy month of Ramadan. The Eid prayers are typically an hour or two after sunrise. In previous years, Assad has been seen attending them early in the morning.

The Britain-based Observatory for Human Rights, which closely monitors the fighting in Syria, said three mortar shells hit Malki early in the morning. The neighbourhood has rarely been targeted by opposition forces during the conflict that only last year saw the rebels bring their battle to the heart of the capital.

There were no immediate reports of casualties or damage in the shelling, which was confirmed by Malki residents, who spoke on condition of anonymity fearing for their own safety.

Rami Abdul-Rahman, the Observatory’s head, said he had no confirmation that Assad’s motorcade had been hit and was skeptical of the reports.

An Islamic rebel brigade, Liwaa Tahrir al-Sham, said it fired several 120mm shells in the direction of Assad’s motorcade after carrying out careful surveillance of its route.

The claim was made on the group’s Facebook and Twitter pages and could not be independently confirmed. The brigade’s head, Firas al-Bitar, told Al-Arabiya TV that the motorcade had been hit but that it was not certain whether Assad himself had been harmed.

Capt. Islam Alloush of the Liwa al-Islam, another rebel brigade, also claimed responsibility, saying there were casualties among Assad’s entourage. He said they carried out the attack separately and without coordinating with Tahrir al-Sham brigade.

Alloush told Associated Press that Assad was not hit but claimed several people within his entourage were killed or wounded. He claimed the footage aired on Syrian TV showing Assad praying at the mosque may have been pre-recorded or fabricated.

“We had promised the Syrian people a big operation for Eid and we have delivered,” he said.

There was no way to verify the authenticity of the claims. Rebels have claimed attacks against Assad or members of his government in the past that turned out to be false.