Ireland “Summer of the Vultures” 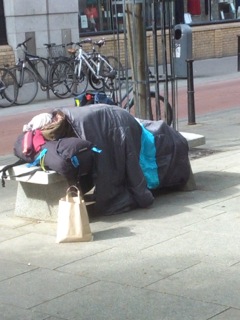 “What held my life together was socialism. Whether a society will ever appear that is based on community, care, and solidarity; whether above all it will be based on reason, I do not know. Reason has always guided my beliefs, often my actions; now my ardor dims, however much my convictions are as strong as ever. (Murray Bookchin, ‘The Twilight Comes Early’[1])

“The tsunami that I warned about has been delayed and outsourced, but it is coming.” (David Hall[2], CEO of the Irish Mortgage Holders Organisation)

With the next ‘Irish’ bank now in line to offload “distressed” householders’ mortgages, Ulster Bank, (part of The Royal Bank of Scotland Group[3] since 2000), telling us, somewhat apologetically, that they have sold €1.4bn in mortgage debt (“non-performing loans”) to American vulture fund, Cerberus Capital Management…

Cerberus[4], based in New York City, describes itself as “…one of the world’s leading private investment firms…with affiliate and advisory offices across the United States, Europe and Asia. With over $35 billion under management, we manage funds and accounts for many of the world’s most respected investors.”

Now their ‘unholy’ investment in the economic crisis here in Ireland is causing more raised voices from the deserted floor of the Dáil (the national parliament), empty, of course, due to to the current regime’s two months holidays being in full swing…

…Not to stop the voices being raised; as if words, instead of concrete policy and action could banish this ongoing nightmare of debt, crisis and now, escalating homelessness.

Still, the punch line of the day had to go to Sinn Féin TD and spokesperson David Cullinane who is quoted as saying:

“Without political direction this summer will be remembered as the Summer of the Vultures.”

Not just summer, though, to those of us too aware of Capitalism’s grim history[5]. And not just summer, throw in there, Autumn, Winter and Spring… one human (and non-human) crisis following the next[6]…

This enormous sale of €1.4 billion in bricks and mortar (to some; potential profit to the rest) follows fast on the heels of Permanent TSBs Project Glas sale to the other so-called vulture fund Lone Star for around €1.3 billion. If you remember[7] this outrage-in-a-world-with-nothing-but-commodities amounted to a total of 7,400 owner-occupier mortgages/homes, while 3,300 were buy-to-let properties/homes.

“Meanwhile there are around €615m worth of private dwelling home loans in the portfolio. These have been arrears for an average of 83 months, with average arrears of €61,000.” RTE News told us.[8]

The Ulster Bank sought to explain itself

…possibly expecting a sharp reaction to the offloading of so many “homes”, saying:

“This difficult decision comes a decade after the financial crisis began and the continued extension of forbearance cannot be maintained.”

“This portfolio does not contain any performing home loans or any home loans in an arrangement.

“Not all mortgages are sustainable and we are obliged to reduce the level of non-performing loans on our balance sheet.

“For mortgages that are not sustainable, additional forbearance will not bring them back to a performing position.”

An obvious series of enormous dilemmas for a financial institution whose operating profits “jumped by 88 per cent to €100 million during the first half of 2018…” (Irish Times[9]). No, seriously.

Response as expected was less understanding

Opposition Sinn Féin TD David Cullinane pointed the finger at government, asserting that[11] the timing of the sales by the bank during the Dáil recess showed “they have the implicit acceptance of Government”.

Pointing the finger at current Finance Minister Paschal Donohue[12] and his predecessor Michael Noonan he claimed a “banks-first” policy was in operation.

“While Ulster Bank say no performing loans are included, this does not exclude the possibility that mortgages meeting their restructuring arrangement are included – this must be clarified immediately,” he said.

Other responses, likewise, were were less than kind

…who, as we all remember, share an enormous portion of blame[13] for the situation people in Ireland find themselves in (after, of course, acknowledging that they kept them in power through their votes), came out and criticised the deal outright

“The net effect of the transaction remains that another bank is outsourcing its dirty work to a US vulture fund… What tools does Cerberus have at its disposal for dealing with these loans that Ulster Bank doesn’t have?.. The bottom line here is the banks and the Government are simply washing their hands of the problem.”

Another Fianna Fáil TD (and currently chair of the Oireachtas Finance Committee) John McGuinness told the online newspaper TheJournal.ie[15] “…he has been contacted by many of the affected Permanent TSB customers in the last two weeks… It’s just horrendous…” (saying) “he does not believe the stories of these customers “match the spin” that the banks put out.

McGuinness also accused the two banks of deliberately announcing these sales during the Dáil’s summer recess.

“I’m repeating my call today for the Dáil to be recalled so we can debate this and to stop it from happening.”

“Is this the society we want? We are going to be left with a very broken society. If the Dáil isn’t going to be recalled, there should be a very public protest, outside the gates of Leinster House. People have to be galvanised now against the banks and against an uncaring – and I won’t say government – political system.”

An interesting sight…thousands of the establishment-Fianna-Fáil-party supporters threatening to overthrow the currently-‘hung’-parliament, included within a number of “far left” TDs[16] and Independents – reminiscent of the unraveling of 20th century ideology going on in Venezuela or Nicaragua at present?

That said – not likely to happen, Deputy McGuinness… though we, of course, share your anger…

…CEO of the Irish Mortgage Holders Organisation whose experience of the banks (let alone the “vulture” companies) is a lot grimmer as:

“Five years ago, I was with a woman, whose husband had died in tragic circumstances and with young children, desperate to keep her home… She was deemed non co-operative by Permanent TSB. It is an abject failure to deal with loans over the years. Vulture funds don’t do solutions for people, so you can be sure there will soon enough be double the amount of families in emergency accommodation because of sales like this.”

Now, he said[17] alongside “unprecedented two weeks of vulture fund sell offs” the figures highlighted the fact that there are many who simply cannot afford to repay their mortgages:

“Today marks an unprecedented two weeks of vulture sell offs by both PTSB and ULSTER Bank today. They are selling 2300 family homes out of 5300 properties.

Ulster Bank say that of the 2300 family homes they are selling to vultures the family have been in an average of 3 Mortgage restructuring arrangements. This proves the point which banks, their mouthpieces are ignoring. It’s about people’s ability to pay not their willingness. Anybody who has engaged with their lender and provided documentation to attempt to restructure their homes an average of 3 times cannot be accused of not engaging or strategic defaulting.

The tsunami that I warned about has been delayed and outsourced, but it is coming.”

At the end of the day

…of course little is heard from the anonymous householders, all 2,300 this time, who are waiting on the phone call (the real one not the one with “the spin the banks put out”) and can only wonder what the future holds..

So avoiding the disgraceful catcalls from a handful of right-wing responses to the local media (to shut up and pay up: “I’m amazed that it can even get to the point where people can get away with not paying for so long – in other countries like the UK, the courts would grant action on non-payment much faster…” etc. etc.[18]) they might notice, if they are keeping up with current media reports, the recent coverage of an evicted family of 6 who were forced to spend the night in a Garda Station[19] on the advice of one of the homeless agencies.

The woman and her 6 children originally from Tallaght in southwest Dublin, Ms. Cash, said she became homeless last September after the house she was renting was repossessed. The family have been living in emergency accommodation ever since.

She added: “I’ve been 11 years on the housing list, they told me before I’ll be another four or five years waiting for a house.”

Fr. McVerry, the homeless campaigner said in response[20] that the majority of families presenting as homeless are coming from the private rental sector, and that until the flow of people coming was stemmed, it would be like “trying to empty the bathwater with the tap still on”.

…should we not expect better?

Though it appears not here, where profit at any (human and non-human) cost is the name of the game…

“In the fall of 1988 a local restaurateur offered to give Burlington’s[21] homeless people one-way plane tickets to anywhere else in the United States. Outraged, the day after Thanksgiving we set up a one-day soup kitchen outside his upscale restaurant, under a banner that read, “Let the Rich Meet the Poor.” We ladled soup and gave away sandwiches. ‘The real problem facing our community,’ we said, ‘is not the homeless or street people; the real problem is a society that tolerates the social and economic conditions that create homelessness in the first place.’” (Janet Biehl says in: “Ecology or Catastrophe: The Life of Murray Bookchin[22])

Makes you wonder what it might take to change the rules of the game?

…To one where people’s needs – not the already discredited banks’ bottom line (who, ‘funny’ enough, like Ulster Bank, are also back into making large profits again[23]) –  nor the rhetoric from government deputies who will probably say anything in the hope of a vote and maintaining their control on the status quo – comes first…?

…Or at the least, as Deputy McGuinness suggests, making the game finally one where “people (are) galvanised…against the banks and against an uncaring  political system.”

…too much to expect…where “the real problem is a society that tolerates the social and economic conditions that create homelessness in the first place”?